A closer look at spoonbills

It was a relaxed, peaceful morning at the Durban Botanical Gardens on 16th May, 2013. I was on my way back to Johannesburg, but decided to spend a few hours strolling through the lush sub-tropical gardens in the hope of photographing a few birds.

The birds were plentiful, with a feeding mob of bronze manikins (Spermestes cucullatus) having breakfast, a family of Egyptian geese (Alopochen aegyptiaca) strolling on the grass, two dark-capped bulbuls (Pycnonotus tricolor) exploring a leafy tree, a spur-winged goose (Plectropterus gambensis) resting next to the pond, a fork-tailed drongo (Dicrurus adsimilis) surveying the gardens and grey herons (Ardea cinerea) perched precariously on the top-most branches of tall trees. 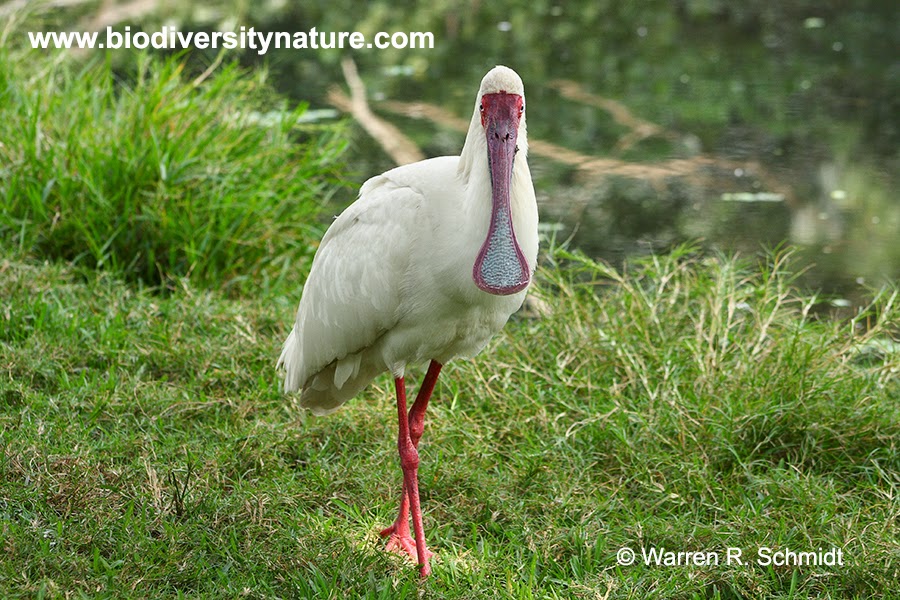 Then I saw the bizarre African spoonbill (Platalea alba) giving me a rather peculiar stare, like some aristocrat rudely interrupted on the golf course. The bright pinkish red stilt-like legs, flattened spoonbill and puffy white feathers stood out starkly against the lush green background. It resumed its walk around the pond, all the while giving me a sideways glance every time the cameras shutter clicked.

The ‘aristocrat’ was soon joined by his ‘caddy’, presumably a juvenile judging by the black legs and bill. Of course this could have been a mother and sibling, but my bird skills don’t go so far as differentiating between male and female spoonbills. I watched these two for almost an hour before heading back to the car park.

What’s in the name?
Platalea is derived from Latin, meaning spoonbill, a name used by Marcus Tullius Cicero (106-43BC), a Roman philosopher, orator and politician. The species name alba is Latin for white, referring to the snowy white plumage of these birds. The common name spoonbill refers to the distinctive spatula-like bill. 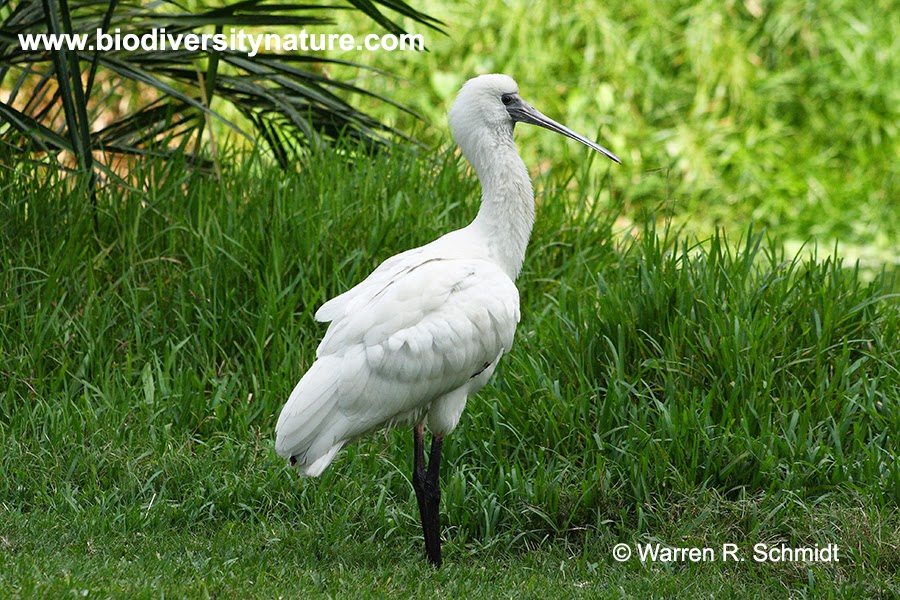 Distribution
African spoonbills are widely distributed throughout southern Africa and are particularly common around Highveld wetlands as well as the eastern coastal regions. Their range has expanded over time with the development of man-made dams in the drier regions of South Africa.

Feeding
The bill is uniquely designed for feeding in the water. Spoonbills swing their heads from side to side in a wide arc, with the bill slicing through the water and snapping up aquatic invertebrates such as molluscs, as well as small fish and probably tadpoles as well. 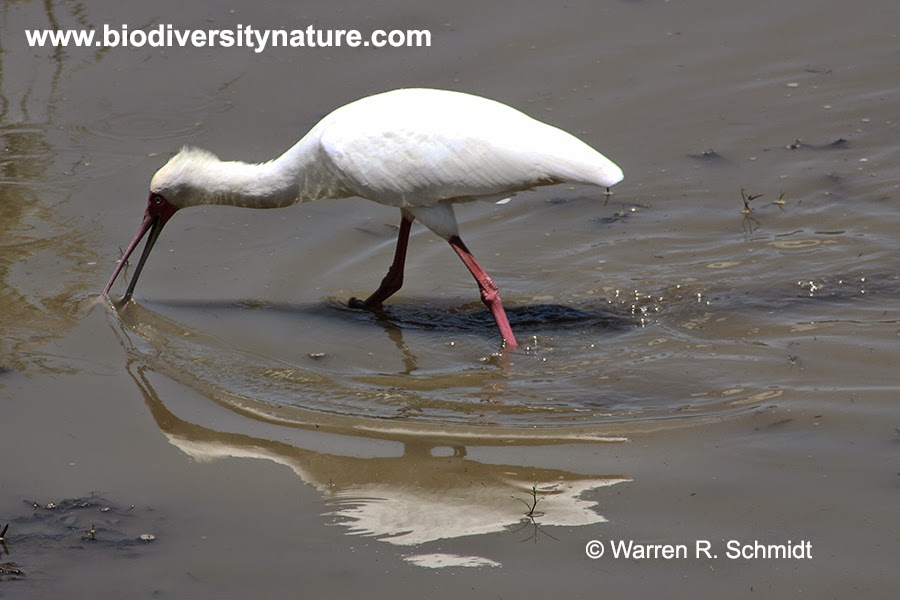 Breeding
African spoonbills are monogamous and egg-laying in South Africa takes place between February to November. Females lay 2-4 long oval eggs and these hatch after an incubation period of 25-29 days. Apparently the female sits on the eggs during the day and the male takes over during the evening. Juveniles leave the colony at around five weeks. 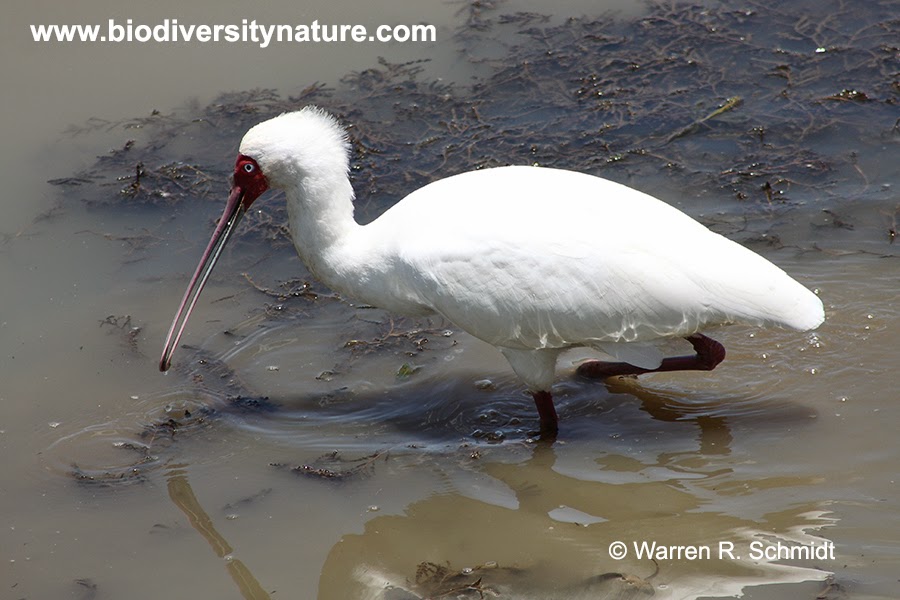 For more information on African spoonbills and other amazing animals from South Africa, visit: http://www.biodiversitynature.com/african-spoonbill-platalea-alba/

There are some animals that just seem to exist to be eaten and the rock hyrax is one of them. Ever weary of an attack from above, these creatures still fall victim to birds of prey and make up a substantial part of the diet of the Verreaux’s Eagle (Aquila verreauxii). Crowned Eagles (Stephanoeatus coronatus) also like them. And so do leopards and caracals. And let’s not forget pythons and black mambas too.

In an evolutionary race to avoid predation, rock hyraxes have developed an ‘umbraculum’- a type of shield in the eye to counter the effect of the glaring sun and hopefully spot an airborne strike from an approaching eagle before it’s too late. Often it is. It is usually an older female that acts as a sentinel and stands guard over the colony. When danger approaches, she lets out a sharp bark which sends everyone scuttling to safety within their rocky retreats. One can only imagine that from time to time, she nods off to the detriment of her or some unfortunate individual in the colony, who is whisked off impaled in the sharp talons of a hunting eagle. 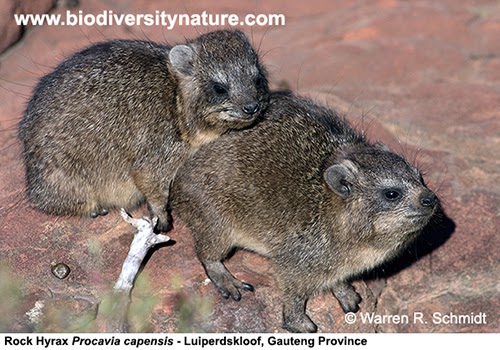 In South Africa, these mammals are often called rock dassies. Dassie is derived from the Dutch word ‘das’ and referable to badger, which is apparently the closet animal the early Dutch settlers could relate this little fury animal to.

Hyraxes are distantly related to elephants and the enigmatic dugong, stemming from the same ancient evolutionary line. However, modern hyraxes are placed in their own mammal order, the Hyracoidea. Three species are known from South Africa. The rock hyrax (Procavia capensis), is the most widespread, occurring throughout much of South Africa, Lesotho and Swaziland. It co-exists in Limpopo Province with the Yellow-spotted Rock Hyrax (Heterohyrax brucei).

The third species is the Tree Hyrax (Dendrohyrax arboreus), which in South Africa, occurs in a patch along the coastal parts of the Eastern Cape and KwaZulu-Natal. Every now and then, the Tree Hyrax scares the living daylights out of some poor soul when they let out a haunting scream. This piercing scream emanating from a dark forest is an experience you won’t soon forget. 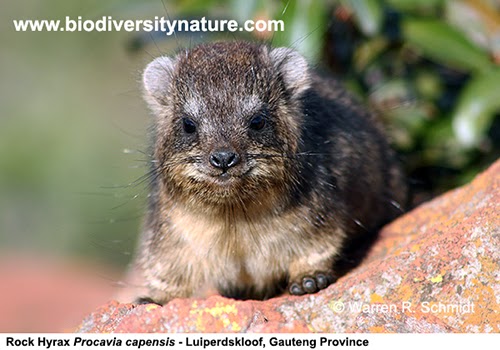 A few years ago, on 21 April 2012, I was fortunate to come across a small colony of rock hyraxes while ambling through the bush at Luiperdskloof in north-eastern Gauteng. The hyraxes quickly relaxed in my presence and I was able to observe them for an hour or two with their activity taking place a few metres from where I was sitting.

These are always special moments when you’re alone in the bush in the company of interesting creatures. Earlier that morning I had seen the resident pair of Verreaux’s Eagles take flight, so I was surprised that they were so relaxed in my presence. I was happy, as it gave me a great opportunity to get some nice photos of these interesting little mammals. 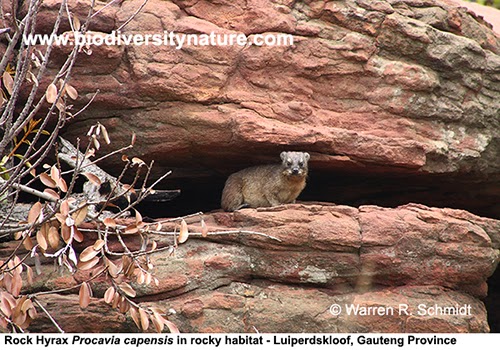 The word chameleon is derived from the Greek words khamai meaning ‘on the ground’ and leon meaning ‘lion’. Exactly why they coined this name is not known, as chameleons are certainly not the equivalent of a lion. Non-the-less, they are fascinating creatures in their own right.

Chameleons are reptiles, and more precisely, lizards. There are slightly over 200 described species. Chameleons are found throughout Africa and Madagascar, as well as Arabia, India, Sri Lanka and southern Europe. There is even a chameleon on the Seychelles Islands in the Indian Ocean. 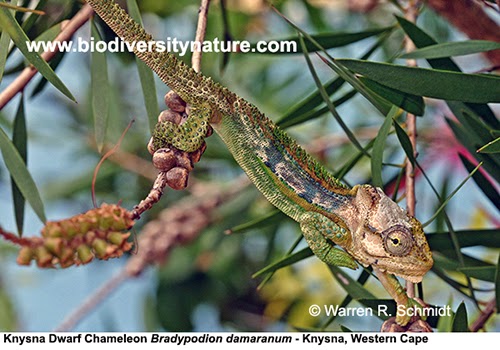 South Africa has a rich diversity of dwarf chameleons in the genus Bradypodion. There are currently 17 described species, almost all of them occur within the borders of South Africa. Some have very restricted distributions.

10 dwarf chameleons are of conservation concern, largely due to habitat loss and environmental degradation. While some species adapt well to urban gardens, others have more specialised requirements and do not do well when their habitat is transformed. 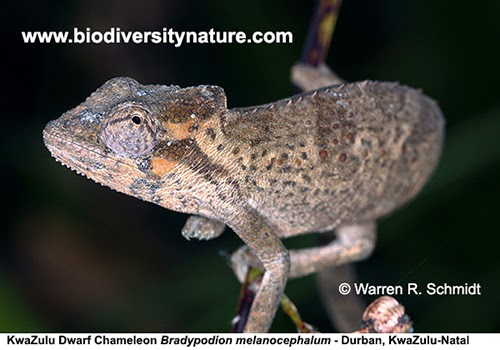 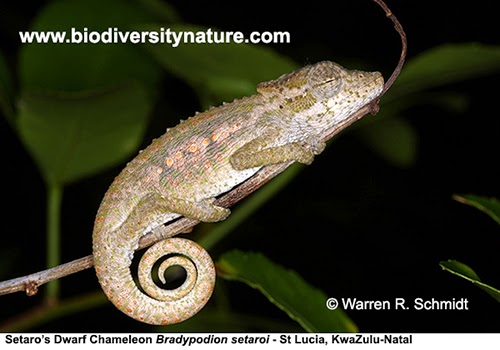 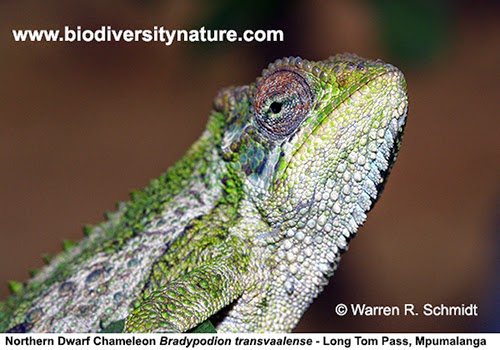 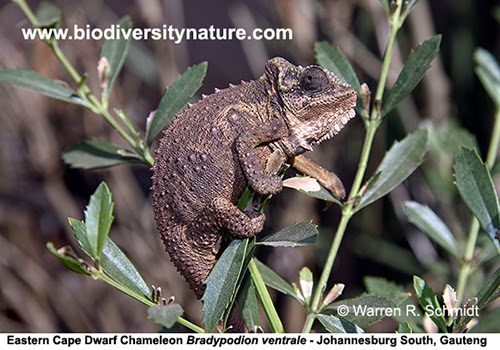 All South African dwarf chameleons give birth to live young; they don’t lay eggs like the larger common flap-necked chameleon Chamaeleo dilepis. Some may produce more than one litter in a season. The Knysna dwarf chameleon is recorded as having 6-20 young in the summer and the KwaZulu dwarf chameleon up to 12 young during summer.